These 18 Grand tour intaglios are taken from originals Intaglios and include some portrait ones and are made from high quality plaster with fine detail.
These would look great split into sets and framed.
Intaglios were originally used as seals. These carvings or cuttings are moulded out of white plaster, marble dust or wax. The original 19th century intaglios were also made from wood or stone. The depressed designs depicting ancient scenes and figures from Greece and Italy. In particular, they were also used as markers for land. They were also collected as souvenirs from European Grand Tours in the first half of the 19th century.

All come plain white and are a great set to own.
We also have lighted box framed intaglios that look great around the home available and are battery operated so no mains power is required.
We ship worldwide and the cost is £24.00,  that is tracked and signed for and tracking information will be provided via e mail, any questions please contact us at mail@plastercraftinteriors.co.uk. 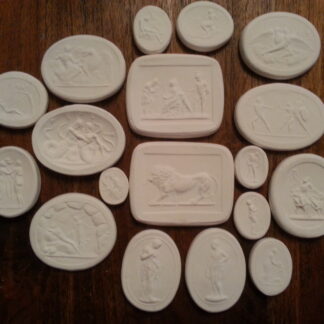